Their fishing nets were empty when they first saw the Lord.
All night they had been fishing in the waters by the shore.
The Lord said, “Go to deep waters, cast your nets once more.”
And because they obeyed, they would never be the same.

They cast their nets and almost before they could begin,
their nets were overflowing and they had to pull them in.
And though this was their greatest catch their fishing days would end.
For they abandoned all when they heard the master’s call. 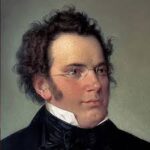 Franz Schubert was an Austrian composer of the late Classical and early Romantic eras. Despite his short lifetime, Schubert left behind a vast oeuvre, including more than 600 secular vocal works (mainly lieder), seven complete symphonies, sacred music, operas, incidental music and a large body of piano and chamber music. His Deutsche Messe, from which these arrangements come, was intended for liturgical use, but was at the outset banned from use in the Roman Catholic church due to censorship.