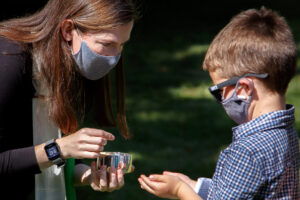 Below is information on each main 10:30 Sunday service, including a list of hymns, anthems and other service music; and a link to the service bulletin. Once a service is over, it is moved to the “Past Services” sidebar. 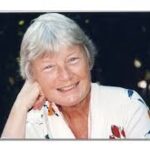 Emma Lou Diemer’s music has been published since 1957 and ranges from hymns and songs to large chamber and orchestral works. She is a native of Kansas City and received her composition degrees from Yale and from Eastman. She is professor emeritus at the University of California, Santa Barbara, and has served as organist in various churches, most recently at First Presbyterian in Santa Barbara. Diemer is a keyboard performer and over the years has given concerts of her own organ works at Washington National Cathedral, The Cathedral of Our Lady of the Angels in Los Angeles, Grace Cathedral and St. Mary’s Cathedral in San Francisco, and others. Her compositional style over the years has varied from tonal to atonal, from traditional to experimental. She has over 150 compositions to her name, and continues to write – at the age of 94.

When Mary birthed Jesus ’twas in a cow’s stall,
With wise men and farmers and shepherds and all.
But high from God’s heaven, a star’s light did fall,
And the promise of ages it then did recall.

If Jesus had wanted for any wee thing,
A star in the sky or a bird on the wing.
Or all of God’s Angels in heaven to sing,
He surely could have it, ’cause he was the King.

Rütti is from Switzerland and studied music at the Zürich Conservatoire, finishing in 1975 with a Solisten-diploma in piano and organ. He has composed a steady output of largely religious choral works, including Alpha et Omega, a Magnificat and Nunc dimittis, the 11-part Missa Angelorum and a setting of O magnum mysterium. His compositions also include this setting, with a new tune, of the carol I Wonder as I Wander, which has been performed several times in recent years as part of King’s College Cambridge’s Festival of Nine Lessons and Carols. Rütti’s music blends the English choral tradition with other genres including jazz and the blues.

Child of the stable’s secret birth,
The Lord by right of the lords of earth,
Let angels sing of a King newborn,
The world is weaving a crown of thorn;
A crown of thorn for that infant head
Cradled soft in the manger bed.

Eyes that shine in the lantern’s ray;
A face so small in its nest of hay,
Face of a child who is born to scan
The world he made through the eyes of man:
And from that face in the final day
Earth and heaven shall flee away.

Voice that rang through the courts on high,
Contracted now to a wordless cry,
A voice to master the wind and wave,
The human heart and the hungry grave:
The voice of God through the cedar trees
Rolling forth as the sound of seas.

Infant hands in a mother’s hand,
For none but Mary may understand
Whose are the hands and the fingers curled
But his who fashioned and made the world;
And through these hands in the hour of death
Nails shall strike to the wood beneath.

Child of the stable’s secret birth,
The Father’s gift to a wayward earth,
To drain the cup in a few short years
Of all our sorrows, our sins, and tears-
Ours the prize for the road he trod:
Risen with Christ; at peace with God.

Dale Wood was a renowned composer, organist, and choral director best known for his church music compositions.  Wood began writing compositions at a young age. When he was 13 years old, he won a national hymn-writing contest for the American Lutheran Church.

Processional Hymn 640    Watchman, tell us of the night    Aberystwyth

Prepare the way, O Zion,
your Christ is drawing near!
Let every hill and valley
a level way appear.
Greet One who comes in glory,
foretold in sacred story.
Oh blest is Christ that came
in God’s most holy name.

He brings God’s rule, O Zion;
he comes from heaven above.
His rule is peace and freedom,
and justice, truth, and love.
Lift high your praise resounding,
for grace and joy abounding.
Oh blest is Christ that came
in God’s most holy name.

Fling wide your gates, O Zion;
your Savior’s rule embrace.
His tidings of salvation
proclaim in every place.
All lands will bow before him,
their voices will adore him.
Oh blest is Christ that came
in God’s most holy name.

There is no rose of such virtue
As is the rose that bare Jesu;
Alleluia.

For in this rose contained was
Heaven and earth in little space;
Res miranda.  (Thing of wonder)

By that rose we may well see
There be one God in persons three,
Pares forma.  (Equal in form)

The angels sungen the shepherds to:
Gloria in excelsis deo:  (Glory to God in the highest)
Gaudeamus.   (Let us rejoice)

Philip Stopford is a contemporary English composer who began his career as a youth chorister at Westminster Abbey, singing under Simon Preston and Martin Neary. His music is equally popular with American choirs as it is with English ones, due to his accessible yet thought-provoking compositional style. Our Youth Choir (along with the choir of St. James’s Church and the Trinity College Chapel Singers) premiered Psalm 150 by Philip at the Albert Schweitzer Organ Festival in October, 2017.

Festival of Lessons and Carols at 3:00 p.m. sung by the St. John’s Youth and Adult Choirs. 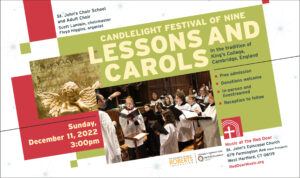 Ding dong merrily on high,
In heav’n the bells are ringing:
Ding dong! verily the sky
Is riv’n with angel singing
Gloria Hosanna in excelsis!

E’en so here below, below,
Let steeple bells be swungen,
And “Io, io, io!”
By priest and people sungen
Gloria Hosanna in excelsis!

November 13, 2022 + The Twenty-third Sunday After Pentecost

October 30, 2022 + The Twenty-first Sunday After Pentecost

October 23, 2022 + The Twentieth Sunday After Pentecost