October 18, 2020 + The Twentieth Sunday after Pentecost 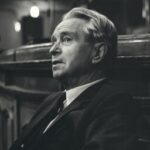 This hymn’s popularity increased when its pairing with the tune Michael by the English composer Herbert Howells became more widely known. Howells’ son, Michael, born in 1925, had died in childhood in 1935 from spinal meningitis. It is believed that shortly after this, in 1936, Howells received a request for a new hymn tune in the morning’s post, and he is said to have written the tune, which he named after his late son, over breakfast.

O strength of Wisdom who, circling, circled,
enclosing all in one lifegiving path,
three wings you have: one soars to the heights,
one distils its essence upon the earth, and the third is everywhere.
Praise to you, as is fitting, O Wisdom 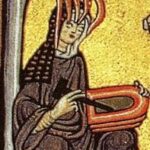 Hildegard of Bingen OSB was a German Benedictine abbess, writer, composer, philosopher, Christian mystic, visionary, and polymath. She is one of the best-known composers of sacred monophony, as well as the most-recorded in modern history. She has been considered by many in Europe to be the founder of scientific natural history in Germany. There are more surviving chants by Hildegard than by any other composer from the entire Middle Ages, and she is one of the few known composers to have written both the music and the words.

Closing Hymn    I want Jesus to walk with me    Sojourner