November 8, 2020 + The Twenty-Third Sunday after Pentecost 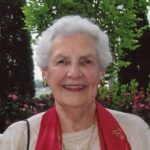 Alice Parker is a national treasure: America’s reigning queen of choral music. – American Record Guide
My twenty-years’ experience with Robert Shaw, an immersion in folk music of many kinds, has had a profound effect on my own understanding of song. I learned to see each tune as a small universe, setting up its own rules of pitch and rhythm, mood and dance. If I understand that universe, and work within it for my setting, the result is an organic whole that allows the original melody to flourish. – Alice Parker 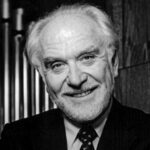 Paul Manz was was an American composer for choir and organ, and a champion of hymn singing.  Manz was most famous for his celebrated hymn festivals. Instead of playing traditional organ recitals, Manz would generally lead a “festival” of hymns from the organ, in which he introduced each hymn with one of his famously creative organ improvisations based on the hymn tune in question. The congregation would then sing the hymn with his accompaniment.