Anthem    How can I keep from singing    arr. Georgeann Weaver (b. 1944)
Text: Robert Lowry, last verse by the composer
Sung by the Youth Choir

My life flows on in endless song,
Above earth’s lamentation
I hear the real though far-off hymn
That hails a new creation.

Refrain:
No storm can shake my inmost calm
While to that Rock I’m clinging.
Since love prevails in heaven and earth,
How can I keep from singing?

When tyrants tremble as they hear
The bells of freedom ringing,
Then all the earth will conquer fear;
At last a new beginning.

I’ll turn to take my neighbor’s hand
And place my trust as offering.
When gathered friends around me stand,
How can I keep from singing. 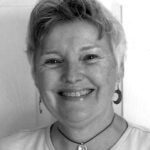 Georgeann M. Weaver  was born in Manchester, Connecticut. She settled in the Boston area after graduating from Boston University in 1967 with a Bachelor Degree in Music Education. She taught music in public schools for two years before raising her family. During the next several years she stayed very active in music by teaching piano, conducting various choirs, composing on a small scale, and singing in the Masterworks Chorale, a 120 voice ensemble which performs in Cambridge, Mass. 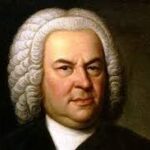 Johann Sebastian Bach was a German composer and musician of the Baroque period. He is known for instrumental compositions such as the Brandenburg Concertos and the Goldberg Variations, and for vocal music such as the St Matthew Passion and the Mass in B minor, and thousands of keyboard works, especially organ. Since the 19th-century Bach Revival he has been generally regarded as one of the greatest composers of all time. Certainly one of the most influential composers, none of the music we know today would exist without his innovations.