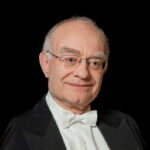 John Rutter is perhaps the best-known English composer of church music – a household name in the Episcopal Church. Rutter was educated at Clare College, Cambridge, where he also served as director of music from 1975 to 1979, at which point he determined to focus his energy on composition. In 1981 he founded the Cambridge Singers, which he also conducted. Although initially Rutter had formed the group in order to record a collection of choral works—both his own and those of others—the group began giving live performances as well.

Blessed be the Holy Trinity
And undivided Unity;
We will give Glory to Him
Because He has shown mercy to us.
Lord, Our Lord, how admirable is thy Name in all the Earth.
Glory be to the Father, and to the Son and to the Holy Ghost.
As it was in the Beginning is now, and ever shall be;
World without end. Amen.
Alleluia. Blessed art thou Lord God our Father.
And praise to You unto the Ages.

Summer Sunday Schedule (through September 4)
9:00 am in the Cloister Garden
10:30 am in the church and livestreamed