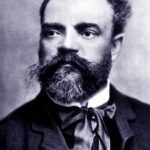 Antonin Dvořák wrote his Symphony No. 9, “From the New World,” soon after arriving in America in 1893.  A yearning melody from the second movement took on a new life as a popular American song that continues to be reinvented. One of Dvorak’s students, William Arms Fisher, put words to the longing melody from the second movement. He called the new song, “Goin’ Home,” and had it published 1922. It has been recorded and arranged numerous times since then, and appears frequently in popular culture. The transformation of Dvořák’s music is a fitting legacy for his symphony about the New World, a work with a message that transcends any one culture.  “Instead of being something that’s about only one aspect of our world,” says Yannick Nézet-Séguin, “it’s something that gives a message of unity.”

Deep River,
My home is over Jordan.
Deep river, Lord,
I want to cross over into campground.

Oh, don’t you want to go,
To the Gospel feast;
That Promised Land,
Where all is peace? 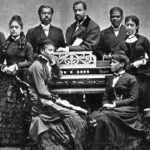 First popularized by the Jubilee Singers, pictured here, Deep River is an anonymous African-American spiritual, popularized by Harry Burleigh in his 1916 collection Jubilee Songs of the USA. The song was first mentioned in print in 1876, when it was published in the first edition of The Story of the Jubilee Singers: With Their Songs, by J. B. T. Marsh. By 1917, when Harry Burleigh completed the last of his several influential arrangements, the song had become very popular in recitals. It has been called “perhaps the best known and best-loved spiritual.”