February 5, 2023 + The Fifth Sunday after Epiphany 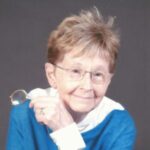 One of Australia’s best-known organists, choir trainers, and composers, June Nixon was the first woman to be granted the John Brooke prize for the Choir Training Diploma at the Royal College of Organists in London. In 1968 she was the winner of the Australian National Organ Competition, and in 1973, was appointed Organist and Director of Music at St. Paul’s Cathedral, Melbourne. She retired from this position in February 2013 and is now Organist Emerita. Nixon is a widely published composer, both in the USA and England, writing music that is accessible and enjoyable for both musicians and listeners. Several cathedral choirs have recorded her works, and her arrangement of the traditional carol The Holly and the Ivy was included in the Festival of Nine Lessons and Carols from Kingʼs College, Cambridge.

The English organist, choral conductor, broadcasting executive, and composer, Herbert (Henry John) Murrill, studied at the Royal Academy of Music in London. He occupied various posts as organist and choral director, and was Professor of Composition at the Royal Academy of Music. In 1936 he joined the staff of the BBC, where he was program organizer, finally reaching the post of Head of Music in 1950.